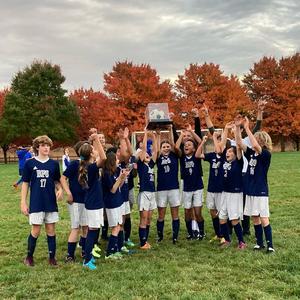 The BFS soccer team has had a tremendous season led by Coach Christopher M. Hawn and Assistant Coach Joe Simek. Says Coach Hawn, “I think the team brought the core values at BFS with them onto the soccer pitch. They supported each other and won as a team. All of them finding ways to contribute led us to victory. They were determined to give all they had. Especially the 8th graders, they wanted to win the Quaker Classic and cement their legacy in BFS soccer history.”  And did they ever! On the first day, BFS won both their games; 2-0 against NFS and 2-1 against AFS. On the second day of the competition, BFS continued their domination with a 3-2 win against Friends Select and then in the championship game a 5-1 win against AFS, making them the undefeated champions of the 2022 Quaker Classic Middle School Soccer Tournament!

The team was jubilant as they celebrated their big win – the first time BFS has claimed the coveted Quaker Classic trophy. Says 8th Grade student Felicity Houghton, “To win the Quaker Classic in my graduating year at BFS was amazing! We’ve left our mark on BFS and this is something we will always cherish together as a team!”