Stories from and about you! 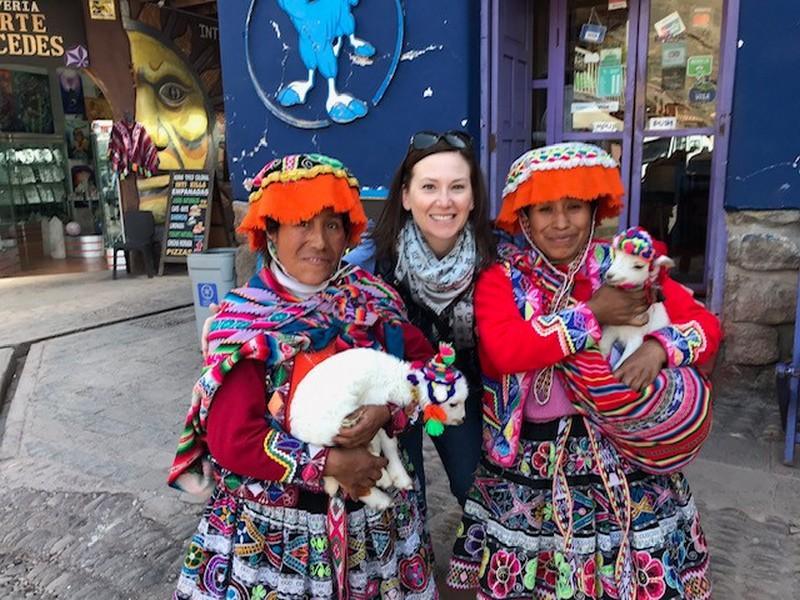 Congratulations to Laura Swanstrom Reece '87, owner and travel agent at Reece Worldwide Travel, who was recently featured in Shoutout Miami and on Channel 5 WPTV! Thank you for noting the impact a Quaker education had on your life AND for all the great travel tips!

I loved my world, but at the age of six, holding my black lunchbox with a red plaid thermos, I marched off with my older brother across the fields to first grade at Buckingham Friends School. I remember the little red chairs, “Dick and Jane’ readers, and the fact that there were eight in my class. I also recall that recess was my favorite subject!. As a young child, I thought a Friends school meant I would have a lot of friends. But, as I learned, it meant a Quaker School where, each Thursday at Meeting for Worship, we’d sit in silence on benches for forty-five minutes as people rose to speak.

For me, school was play, the “Three R’s”, naps, and nature walks in the woods looking for lady slippers, jack-in-the-pulpits, praying mantises, and red-winged black birds.  Once I scared myself to death, accidentally setting off the fire alarm, as the whole school filed outside and I hid under the stairs.  In fourth grade, I was disappointed to be cast as Cinderella’s echo in the well, invisibly repeating lyrics to “Some Day My Prince Will Come,” when I’d dreamed of playing Cinderella. Unfortunately for me, Chrissy Keene got the part.

Most of all I remember Mrs. Haines’ joint fifth-sixth class. Strict, robust, gray hair pulled back, pins falling from her bun - she scared us to death. “Silence,” she’d command. “Correct your math workbooks and bring them to me.  You may be excused for recess when your pages are correct and the corners clipped off.”

She had the scissors.

Once freed from my math workbook I’d race to the playground to cartwheel, skip rope, play hopscotch or twirl around the giant-stride Maypole, soaring in ever-exuberant flight.  Then, after the monkey bars and swings, I’d hang by my knees from the trapeze or, upside down and inside out by my ankles, watching the earth fly by my nose.  But my best trick was going down the slide standing up. You could go especially fast if first you sprinkled pebbles and dirt down from the top.  Ready, I’d wait until friends gathered alongside to witness my awesome dare.

One day, after climbing the ladder to the top and standing in a victorious heroic pose as the crowd grew, I slid down super-fast and hurtled off the end crash landing on my belly, knocking the wind out of my sails. Face down in the grit, unable to move, speak or cry, I lay in agony, thinking I was about to die as the whole school stared.  It was the living end.

In the hush I overheard Mrs. Haines quietly telling everyone to leave. Then, helping me up, steadying me as I hobbled back to her classroom, she said she was sorry and asked how I felt. Staring down, I said nothing.  She cleaned me up and got me a snack: I could skip class. I could read or draw.  She drove me home after school and explained everything to Mom.

After she left, Mom had a word with me, told me to write a thank you note to Mrs. Haines and, after homework, said I could watch Howdy Doody (a special privilege as TV had just been invented). With three shockingly addictive channels, we were NOT allowed to watch television on school nights, only Groucho Marx’s Comedy Hour or Amos and Andy with my parents on Sundays - as school, not TV, was the most important thing. 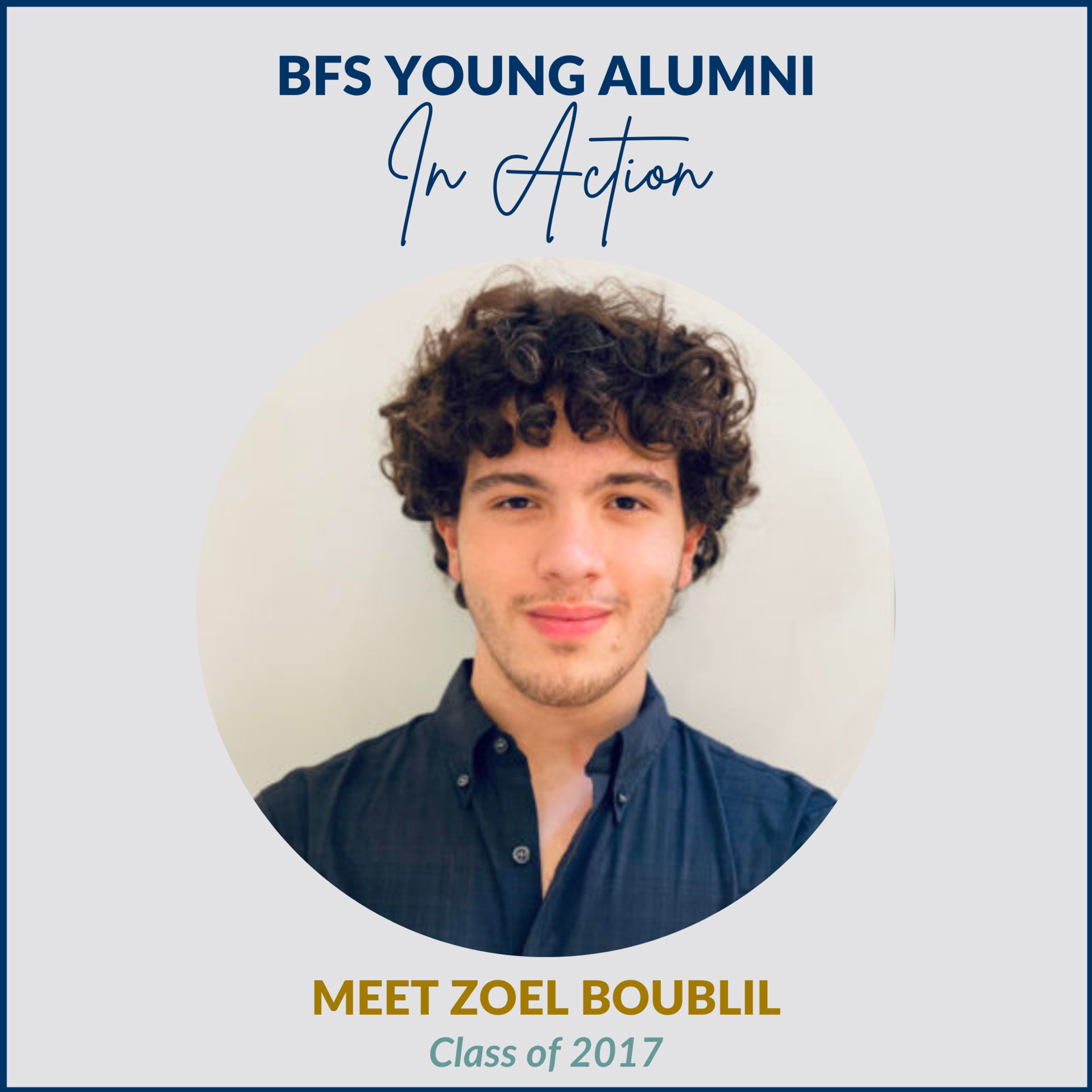 Zoel Boublil '17 joined the RFK Human Rights Organization Youth Advisory Board after participating in a workshop last summer. He is currently helping to develop their youth education infrastructure and moderate events such as the world leader speaker series. So far, he has had the opportunity to interview Yves Leterme, former prime minister of Belgium, and will interview Boris Tadic, former President of Serbia. He is also co-spearheading an original project for them, creating a three-month long online workshop based on the UN Sustainable Development Goals. His intention for the program is to provide education about sustainable development and to inspire budding activists about compelling engagement opportunities. He is collaborating with experts in human rights, climate change and environmental studies research such as Dr. Glenn Mitoma, Director of the Thomas J. Dodd Research Center. Prominent youth activists like Marie-Claire Graf and Cara Kennedy-Cuomo also participate in the program. 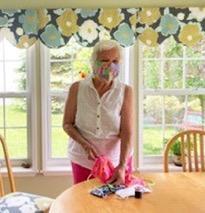 The Make It Happen Mask Project in Buckingham Springs was headquartered on the semi-open porch at Betts Slim’s house.  Betts had been transporting masks made by a drapery firm in Richboro (closed due to COVID 19) to her daughter’s medical office.  PPE supplies for medical offices were in extremely short supply and the homemade masks were critical.

After a delivery from Richboro, Betts thought about all the people in Buckingham Springs who might have sewing machines.  She put out the word, and 7 seamstresses eagerly offered their services.  Over a 6 week period, they produced over 700 masks and tweaked another 300 to meet medical standards. The masks were donated to medical workers, veterans, homeless people, and other local residents. 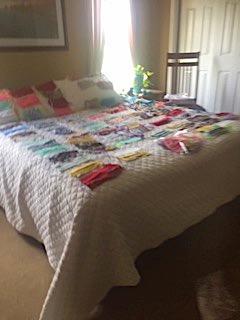 In all seventy people joined the Make it Happen Mask Project—some people made donations, others sewed and processed the masks. The assembly line leveraged the passion and talents of people from 96 years of age and younger.

Betts commented that, “Many of us were children when the second World War started, and we were all called upon to help the cause.  As a ten year old, I knitted scarves for our soldiers in Europe and endured all kinds of shortages. The Make It Happen Mask Project gave us a similarly active role in hard times. It helped us through knowing that we were part of the effort. After all, there’s less time to worry when you do things to “MAKE IT HAPPEN”!

Do you know of a BFS community member making a positive difference in today’s world? Do you have a poem, short story, or testimonial to share about your BFS experience? Please share their story and photos to [email protected]